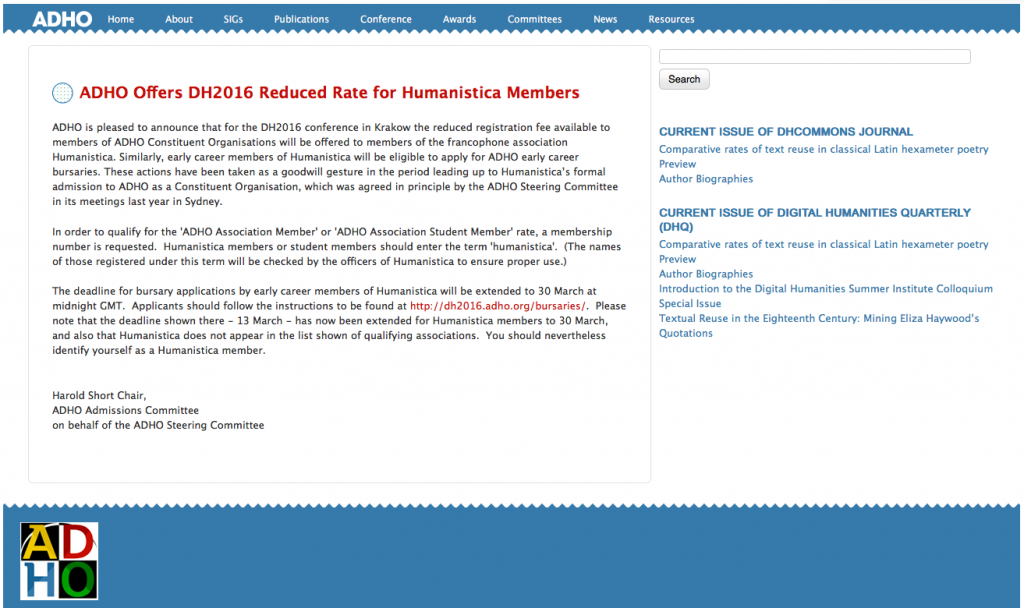 ADHO is pleased to announce that for the DH2016 conference in Krakow the reduced registration fee available to members of ADHO Constituent Organisations will be offered to members of the francophone association Humanistica. Similarly, early career members of Humanistica will be eligible to apply for ADHO early career bursaries. These actions have been taken as a goodwill gesture in the period leading up to Humanistica’s formal admission to ADHO as a Constituent Organisation, which was agreed in principle by the ADHO Steering Committee in its meetings last year in Sydney.

In order to qualify for the ‘ADHO Association Member’ or ‘ADHO Association Student Member’ rate, a membership number is requested.  Humanistica members or student members should enter the term ‘humanistica’.  (The names of those registered under this term will be checked by the officers of Humanistica to ensure proper use.)

The deadline for bursary applications by early career members of Humanistica will be extended to 30 March at midnight GMT.  Applicants should follow the instructions to be found at http://dh2016.adho.org/bursaries/.  Please note that the deadline shown there – 13 March – has now been extended for Humanistica members to 30 March, and also that Humanistica does not appear in the list shown of qualifying associations.  You should nevertheless identify yourself as a Humanistica member.